Rhino Tears. Wine With A Cause. 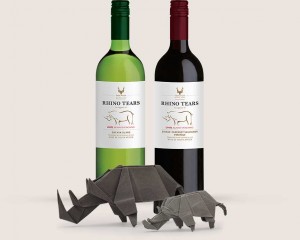 When is a wine not just a wine? When it’s Rhino Tears wine.

The idea for the wine came about when Mt Vernon MD, John Hooper, met with John Turner, Chairman of the SANParks Honorary Rangers Conservation Services Unit; and Andre Nel, owner of The Hat & Creek restaurants in Hoedspruit and Phalaborwa. After spending a couple of days with the field rangers at the Kruger Wilderness Experience bush camp in the Kruger National Park, the idea for a wine that could raise money for anti-poaching efforts was developed.

“I have had an inherent love for wildlife and as a child we would be fortunate to spend our holidays in the bush, fishing or in remote locations”, explains Hooper.

The Rhino Tears wine brand, from the Mt Vernon wine estate in Cape Town, is now available to purchase online, meaning that wine lovers from around the country can now support the fight against rhino poaching in a fast and efficient way.

The wine is available for purchase on www.rhinotears.co.za for R700 for a full case (12 bottles including delivery), and can be delivered countrywide.

A portion of sales from every single bottle sold – R15 per bottle – go directly to the Unite Against Poaching initiative of the the SANParks Honorary Rangers to be used in anti-poaching projects in SANParks.

The funds raised are used to purchase equipment and train rangers on the frontline of the anti-poaching war. The money is used effectively and is not used for administration, but rather for essential equipment, such as basic bush gear for the rangers protecting the Kruger National Park. This equipment – tents, sleeping bags, first aid kits, cooking equipment and more – allow the rangers to survive in the bush for long periods, making them much more effective in tracking poachers.

The funds also go towards funding special projects such as the Kruger National Park canine training facility, where dogs are trained to track and hunt down poachers entering the park.

“Wine lovers can be confident that 100% of the funds raised from sales of Rhino Tears go directly to such projects,” says Louis Lemmer, National Chairperson of the SANParks Honorary Rangers.

“We contribute R15 per bottle to the cause, which is more than any other brand does as a percentage of the product’s cost. With the e-commerce site now live, South Africans from the most remote parts of the country can their support to the ongoing fight against rhino killing, while enjoying fantastic wine at the same time, “explained John Hooper, managing director of Mt Vernon wine estate.

As well as online, Rhino Tears wine can be purchased in major retailers around the country, including Pick n Pay, Makro, Tops, Spar, Fruit and Veg City and major independent retailers.

Those supporters who wish not to purchase wine can make a donation via the Rhino Tears SMS donation line. SMS the word Rhino to 38730 and R10 will be collected for the campaign.

Further information about the wine and the anti-poaching initiatives can be found at:

The Rhino Tears website was developed as a pro-bono project by Platinum Seed.