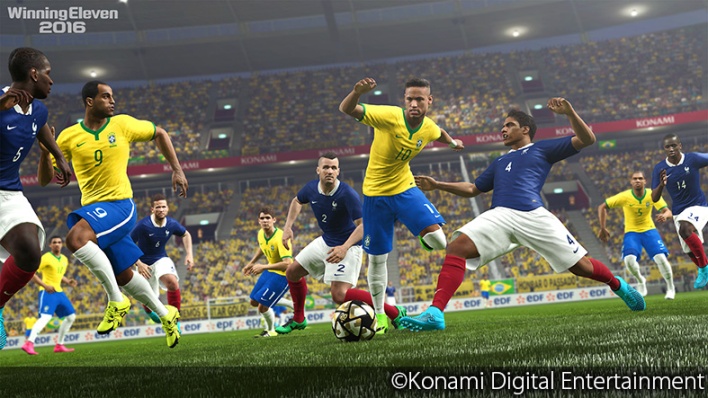 Konami Digital Entertainment Co., Ltd. will exhibit at Tokyo Game Show 2015 (TGS 2015), due to be held at Makuhari Messe (Chiba) beginning Thursday, September 17th. In addition to global titles such as “METAL GEAR SOLID V: THE PHANTOM PAIN” (below, “MGSV: TPP”), the latest in the over 41.7 million*2copy-selling METAL GEAR series, and “Winning Eleven 2016” (overseas title: “PES 2016: Pro Evolution Soccer”), the newest game in its 89.8 million*2 copy-selling soccer game series, there will also be domestic titles such as the hugely popular JIKKYOU PAWAFURU PUROYAKYU series, presented on various devices and with a variety of game mechanics.

In addition to its main offline game, “MGSV: TPP” will soon also feature the multiplayer online versus*3 mode “METAL GEAR ONLINE” (below, “MGO”*4). The KONAMI booth at TGS 2015 will feature the world’s first playable demo kiosks, allowing a maximum of 16 players at once to try the game in advance.

This year, the Winning Eleven series is celebrating its 20th anniversary, and has been honored with the “Best Sports Game” award for the second year running at gamescom 2015, one of the world’s premier game shows. At TGS 2015, demo kiosks will be available for visitors to try this game, critically acclaimed around the world, ahead of its Thursday, October 1st release date. We will also conduct a special campaign that will reward users of mobile soccer games with Neymar, the official endorsement player for KONAMI soccer games.

In “JIKKYOU PAWAFURU PUROYAKYU” (below, “PAWAPURO”), a mobile baseball game that has been downloaded over 15 million times, an in-game user-participation event is currently underway to commemorate TGS 2015. Additionally, there will be a special event at the TGS 2015 venue that will be exclusive to “PAWAPURO” app users. On top of that, the newest title in the JIKKYOU PAWAFURU PUROYAKYU console game series will be announced at TGS 2015. (Announcement is scheduled for around 13:30, September 17th, at the special stage within the KONAMI booth.)