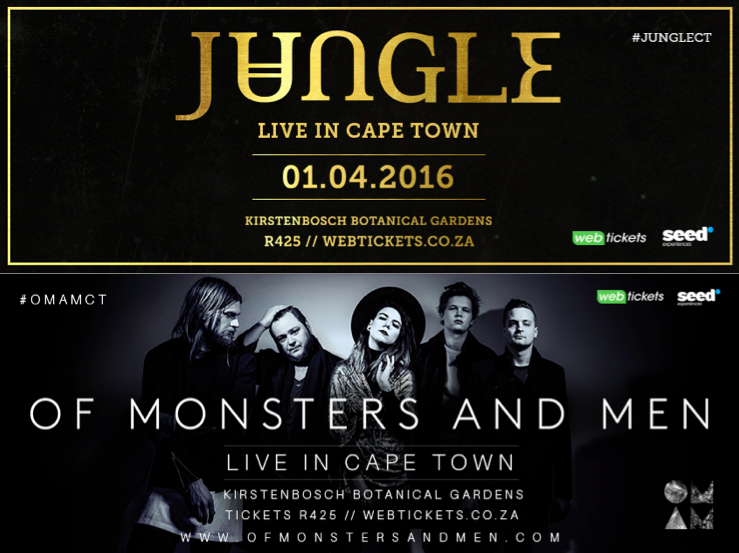 Initially first teased at Rocking the Daisies and Vodacom In The City, Seed Experiences is now very excited to announce two incredible international acts, Of Monsters And Men & Jungle to perform live at Kirstenbosch Botanical Gardens in Cape Town in 2016.

Tickets go on sale this week from 09:00 on Thursday 8th October at www.webtickets.co.za

Of Monsters and Men first had the world talking in 2011 with their inescapable and infectious quadruple-platinum smash “Little Talks.” An engaging mix of indie, folk, and alternative, the Icelandic quintet’s critically acclaimed full-length debut My Head Is An Animal [Republic Records] climbed to the top of the Billboard Top 200 chart and has sold over 2 million albums worldwide.

Since then the group have delivered revered performances at festivals such as Lollapalooza, Bonnaroo, Coachella, Newport Folk Festival, Osheaga, Glastonbury, Reading and Leeds, Pukkelpop, and Splendour in the Grass as well as at countless sold out headline shows around the world.

OMAM will be performing live on Wednesday the 30th March 2016.

There is no blueprint to Jungle’s irresistible, life-enhancing, report-to-the-dancefloor sound but there are many ingredients. It’s P-Funk and ‘Grand Theft Auto’, it’s Curtis Mayfield and ‘Tron’, it’s the Beach Boys and Joy Division and Marvin Gaye and Can, all cut up and refracted in a London neighbourhood where anything can happen.

And behind the rising buzz – the BBC Sound of 2014 nomination, the 4 millions plus plays of the ‘Platoon’ video, the US tour that sold out on the back of their SXSW appearance before Jungle even had an official record out in America – it’s a DIY story. Working from their home studio in Shepherd’s Bush, the core Jungle duo known only as J and T set out their store long before they came on any label’s radar with a brace of handmade mini-classics. A couple of singles – ‘The Heat’’s supple 4am soul snap, the ice-cold search-and-destroy beats of ‘Platoon’ – connected 2014 and 1974, London with Rio and New York, the feet with the unconscious mind.

Jungle will be performing live on Friday the 1st April 2016.

Hashtag Of Monsters And Men: #OMAMCT

OF MONSTERS AND MEN – Cape Town

Support Acts: Still to be announced

This is an all ages event.

Support Acts: Still to be announced

This is an all ages event.

Tickets go on sale on from 09:00 on Thursday 8th October at: www.webtickets.co.za

Of Monsters And Men & Jungle will also be headlining the Sowing the Seeds Music & Lifestyle Festival at Emmarentia Dam in Johannesburg on Saturday the 2nd April 2016. For all information and tickets go to www.sowingtheseeds.co.za