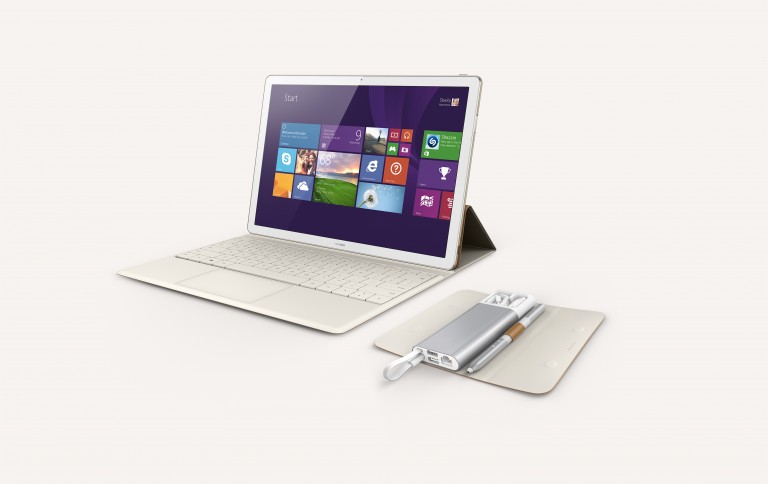 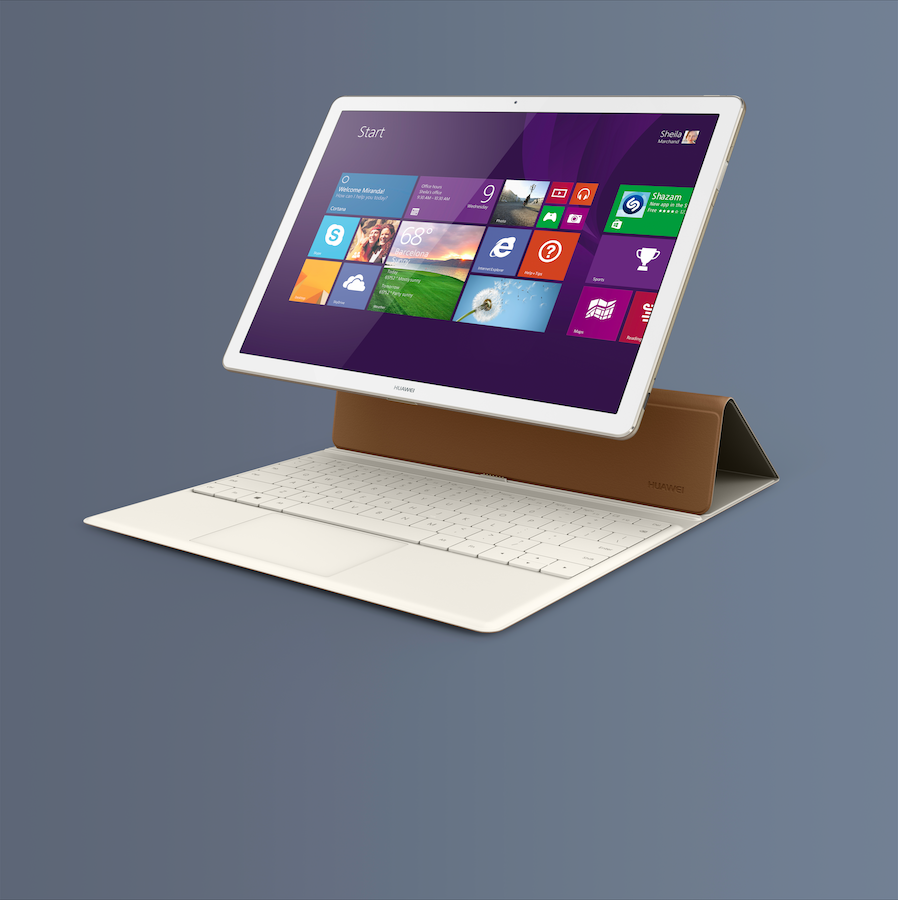 Huawei, the world’s 3rd largest handset manufacturer, has also jumped on the bandwagon and today announced the new MateBook.

The new device runs Windows 10, either Home or Pro, and is powered by Intel’s new M core processors.

Known for beautiful design, Huawei has not disappointed with the MateBook, and wows with a 12-inch display (2160 x 1440), slim metal body and beautiful rounded edges. It connects to a keyboard via the leather cover which, when closed, doesn’t add much bulk to the 6.9mm thin tablet.

“With this landmark device, Huawei is demonstrating our industry-leading design and manufacturing expertise by bringing a beautifully crafted flagship product to market that is redefining the new style of business – connected computing across all devices in almost every scenario,” said Richard Yu, CEO, Huawei Consumer Business Group. “Huawei has successfully channeled its comprehensive experience and excellence in building premium mobile products into the needs of the modern business environment by introducing a highly efficient device, seamlessly capable of integrating work and entertainment functions.”

Huawei has also opted to include a MatePen with the device, however unlike the Apple Pencil, the MatePen does not come with an eraser but rather a laser pointer, indicating that this is aimed for the business person instead of artists and creatives.

Ultra Slim – A Unique Device with an Innovative Design

Combining the mobility of a smartphone with the power and productivity of a laptop, the MateBook is designed with simplicity in mind. With minimal embellishment and a sleek appearance, the device is made of high-quality aluminum unibody that is both elegant and sophisticated. The MateBook features a strong protective body to withstand the rigors of an on-the-go lifestyle, and its slim profile and ultra-low weight of just 640g makes it ideal to take anywhere.

Keyboard Case, Keyboard and Touchpad – Fusion of Fashion and Usability

The MateBook keyboard case is made of environmentally friendly, soft PU leather, the perfect choice to match style with functionality. The durability of the keyboard case also provides an ideal level of protection. The keyboard features a 1.5mm keystroke and a chiclet keycap design, which allows for larger key surfaces to minimize typing errors. The built-in touchpad uses multi-touch technology that supports smooth and precise finger movements, combining comfort and utility.

The MateBook’s 12-inch IPS multi-touch screen is further enhanced by an ultra-narrow frame and a screen-to-body ratio of 84 percent. The screen boasts a resolution of 2160×1440 and a 160-degree wide angle for an immersive experience. The color gamut reaches an impressive 85 percent, capable of displaying true-to-life colors.

Long-lasting Battery – Made for Mobility

To ensure the MateBook delivers optimal performance as a mobile device, battery life and power were a top priority throughout the design process. Its 33.7Wh high-density Lithium battery provides enough power for nine hours of work, nine consecutive hours of Internet use and 29 hours of music playback. The device also features Huawei’s exclusive power-saving technology to meet the needs of business users. The MateBook’s battery can attain a full charge in just two-and-a-half hours. When there is not enough time for a full charge, the device can power up to 60 percent battery strength in just one hour.

High-efficiency and Agility – Built for Productivity

The MateBook runs on Windows 10 and is powered by a 6th Generation Intel Core m-series processor, putting high-speed processing power and the most essential business productivity tools, including Microsoft Office, at users’ fingertips. The device offers up to 8GB of LPDDR3 memory and a solid-state hard drive with capacity up to 512GB. Utilizing a unique stacked hardware process, Huawei is able to deliver a fanless design, ensuring zero noise when the MateBook is in use.

MatePen – More than a Stylus

When only a hand-written note will do, the accompanying MatePen stylus offers 2,048 levels of sensitivity, perfectly capturing users’ subtle and diverse pen-tip actions with zero delay. For advanced business functions, MatePen supports graphics and mathematic functions, and can be used as a laser pointer for delivering presentations.

Additionally, the MateBook features a Wi-Fi mobile hotspot for users to stay connected when a traditional Internet connection is not available. Other features that ensure an efficient mobile experience include a seamless data transfer capability that allows drag-and-drop document transfer to and from Android smartphones.

The MateBook also joins the Huawei made Nexus 6P as the only 2 devices from the Chinese company to sport USB-C ports.

At this stage pricing and availability for the South African market have not yet been confirmed.