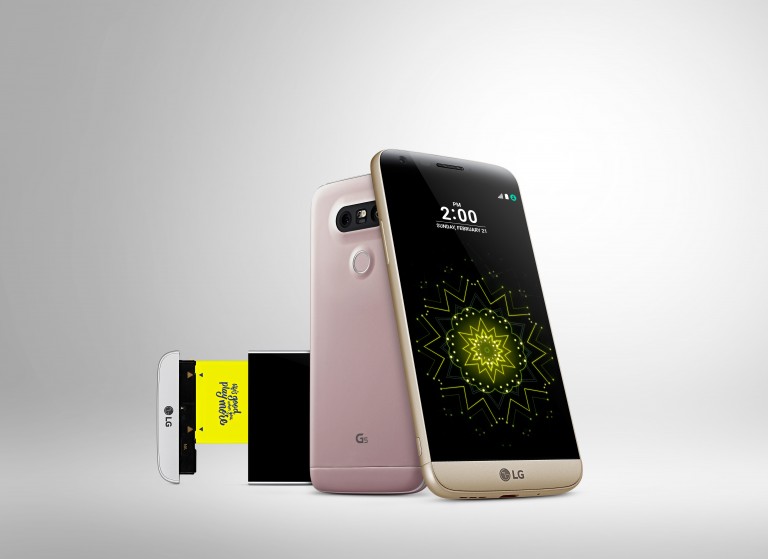 LG Mobile has announced the G5, the much anticipated follow-up to 2015’s G4, at a launch at Mobile World Congress in Barcelona earlier today.

The G5 is one of the bravest moves by the South Korean company’s mobile division to date.

The G5 features a full metal unibody design, a 5.3-inch Quad HD IPS Quantum Display (2560 x 1440 / 554ppi), a dual camera set up and fingerprint scanner on the rear of the device. In a surprise move, LG has also opted to make the G5 a modular device (of sorts).

The bottom of the G5 slides out, after pushing a button on the side of the device, allowing you to swop out your battery or slot in one of LG’s accessories which form part of the company’s LG Playground range.

With this, LG aims to strengthen the ties with its partners and introduce various devices and supporting programs to fully maximise the LG Playground. 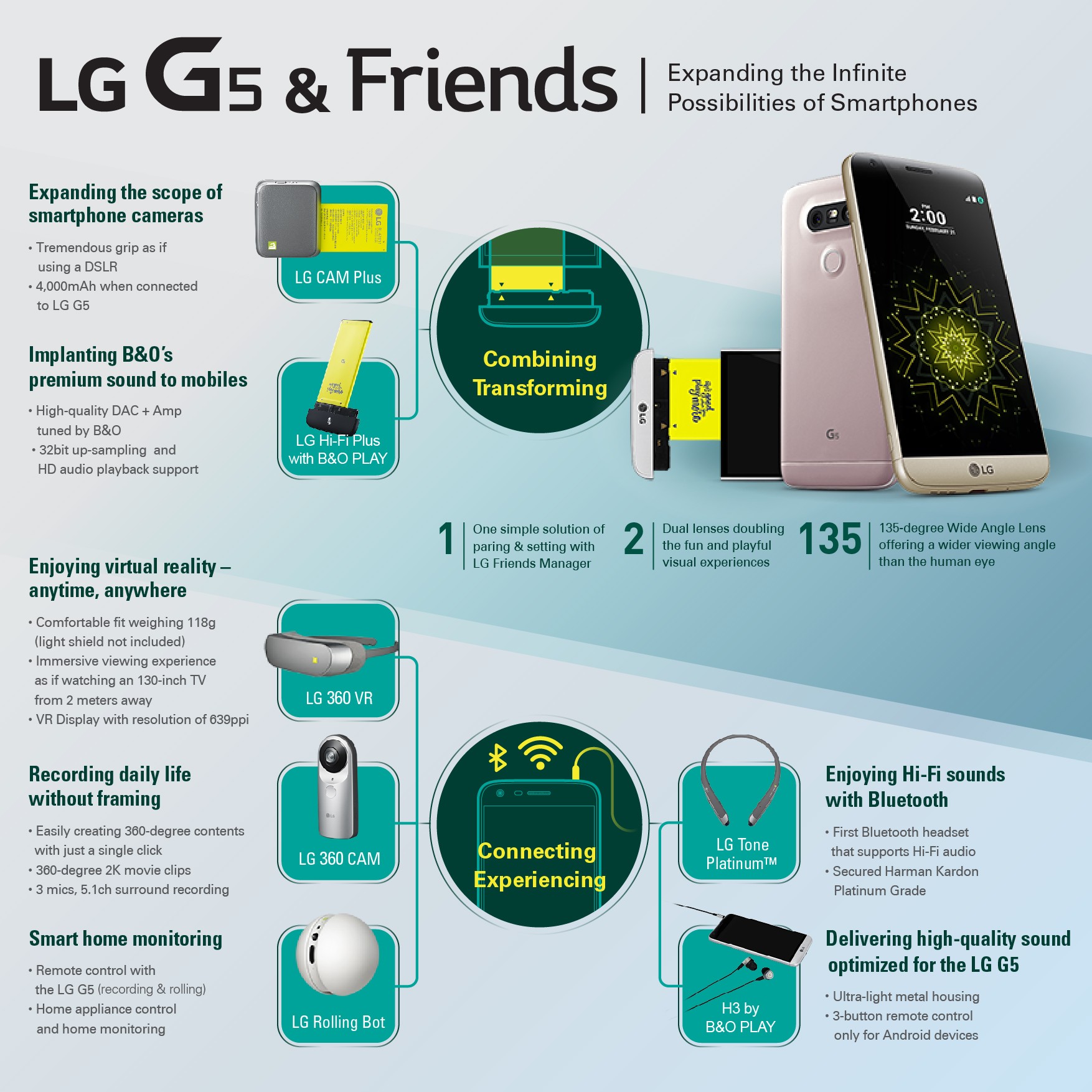 As part of the new ecosystem, LG is introducing a wide range of companion devices,called LG Friends, to deliver new mobile experiences beyond those currently provided by traditional smartphones. 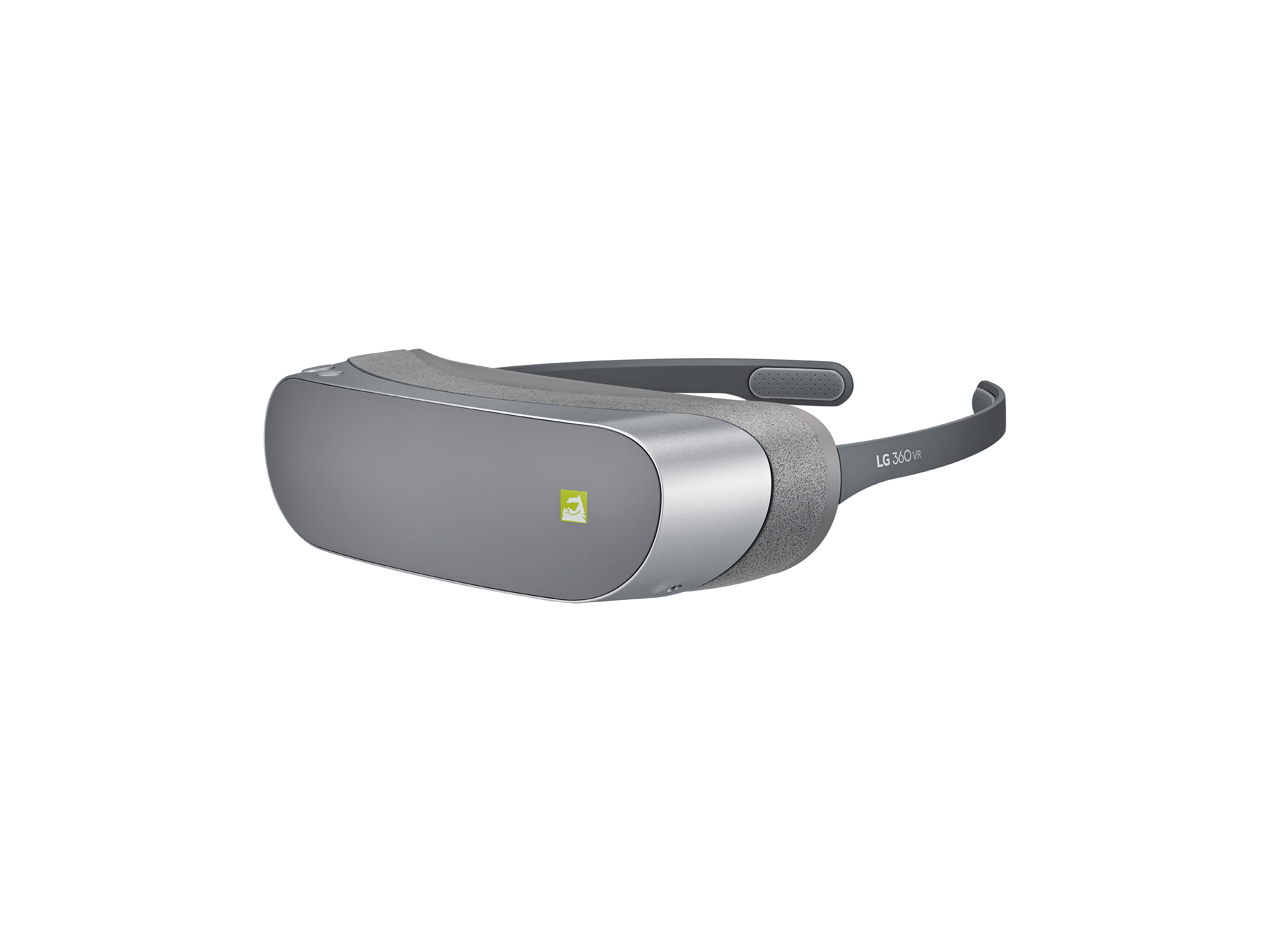 The LG 360 VR is a VR goggle that can be connected with the G5 via a dedicated cable and works exclusively with the G5 to simulate a 130-inch TV viewed from two meters away. It has a stylish design that is foldable so that users can easily carry and watch VR content anytime, anywhere. Unlike other VR devices that require a smartphones to be inserted in the device, the LG 360 VR weighs only 118g (4.16 ounces) and is just one-third as heavy as competing VR goggles while delivering a resolution of 639 ppi. The device is compatible with 360-degree images and videos captured with LG 360 CAM as well as all Google Cardboard content. 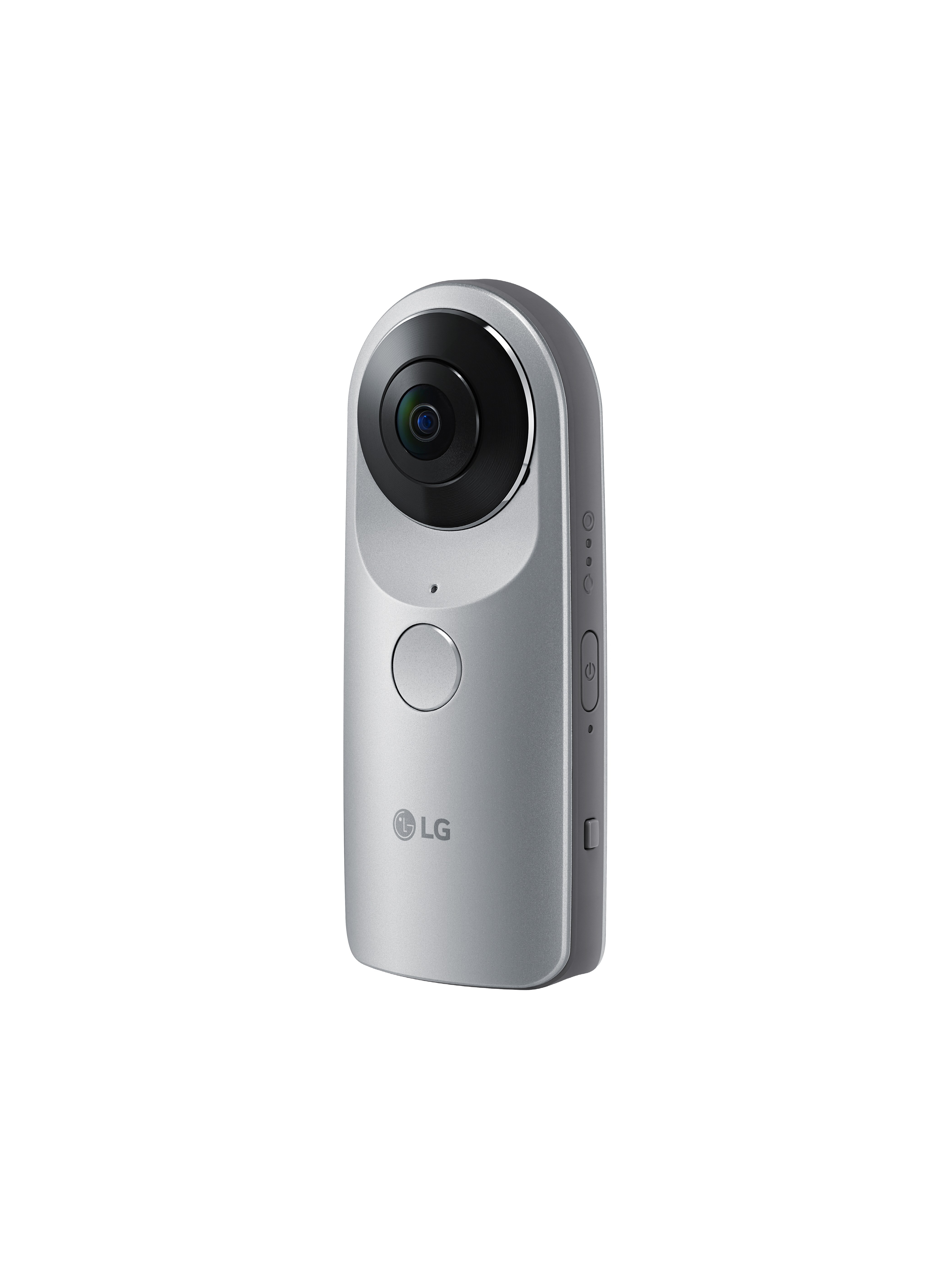 The LG 360 CAM is a compact 360-degree angle camera equipped with two 13MP 200-degree wide angle cameras, 1,200mAh battery and 4GB internal memory, which can be supplemented by a microSD card. The LG 360 CAM can be easily connected to the LG G5 allowing users to create 360-degree content. The LG 360 CAM provides 2K video and 5.1 surround channel recording on three microphones to help users effortlessly create high-quality 360-degree contents. Thanks to the partnership with Google, images taken with the 360 CAM can be uploaded to Google Street View and YouTube360, adding the fun of sharing creative contents with others. The images will also be available to view on the LG 360 VR or other smartphones or devices that are capable of 360-degree content. 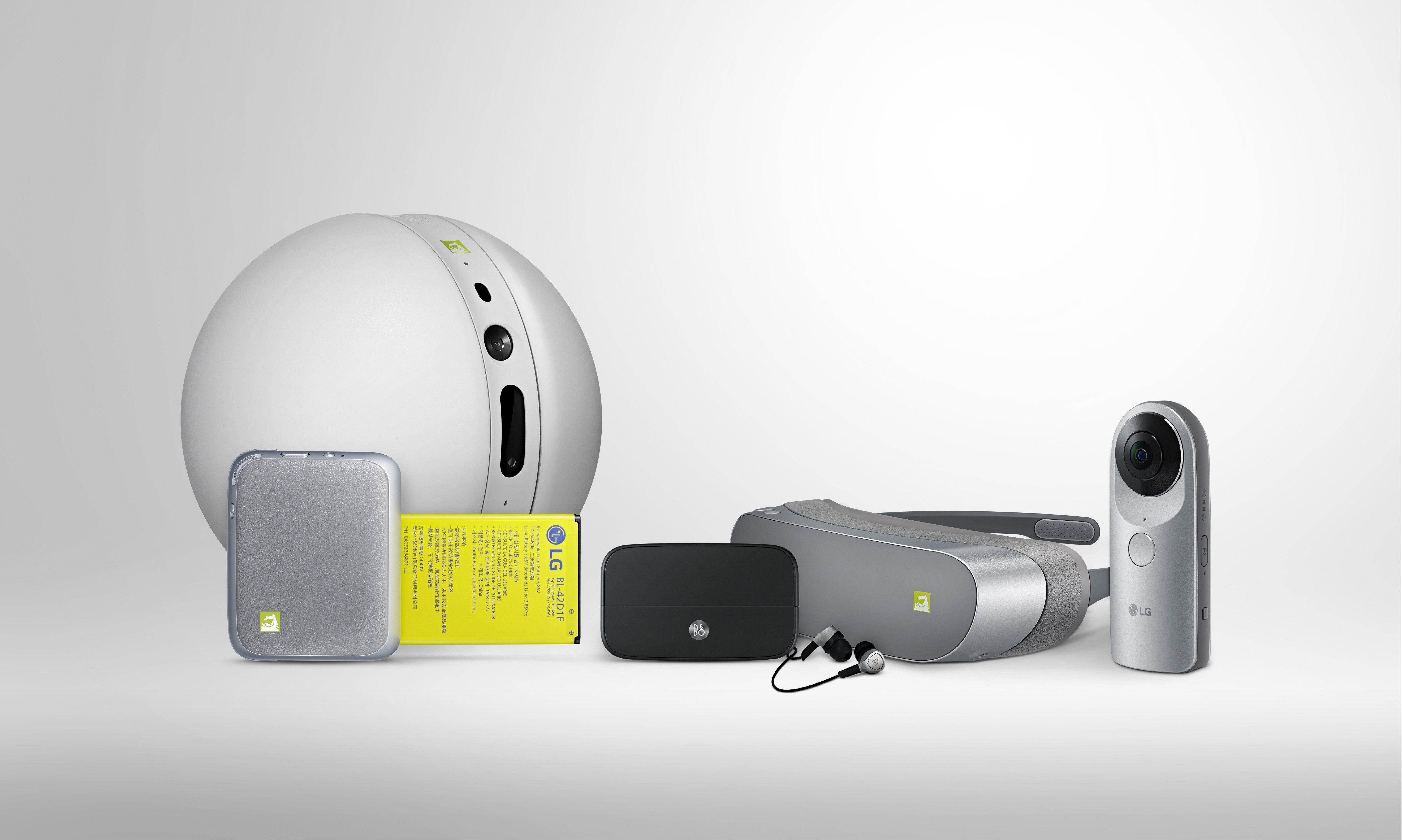 The LG Rolling Bot is a companion device that rolls like a ball while capturing images and videos with its embedded 8MP camera. Not just a toy, the LG Rolling Bot can be used as a monitoring system for the home, pet care companion as well as a remote controller for compatible home appliances. With an IP camera connectable via Wi-Fi, users can remotely monitor the interior of their homes with the LG G5 via live streaming. 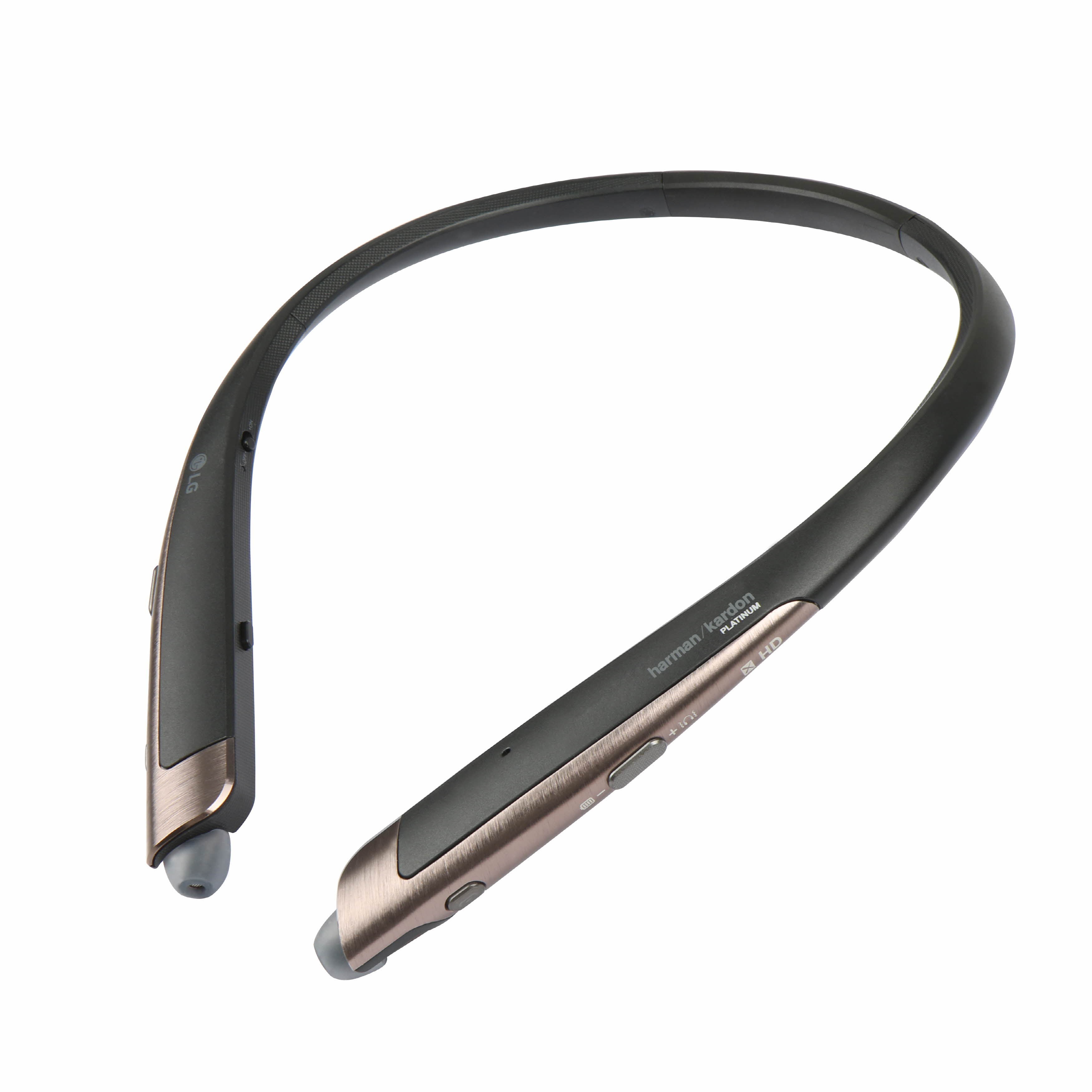 The LG TONE PlatinumTM (model HBS-1100), the latest in the LG TONE Series, is a Bluetooth headset that has earned the Harman Kardon® Platinum grade for its superior sound quality. With a Balanced Armature design for minimum distortion, LG Tone PlatinumTM delivers exceptionally sharp and clean sound. What’s more, it is the world’s first Bluetooth headset equipped with aptX™ HDcodec, delivering lossless 24-bit audio for sound that is unrivaled in a wireless device. 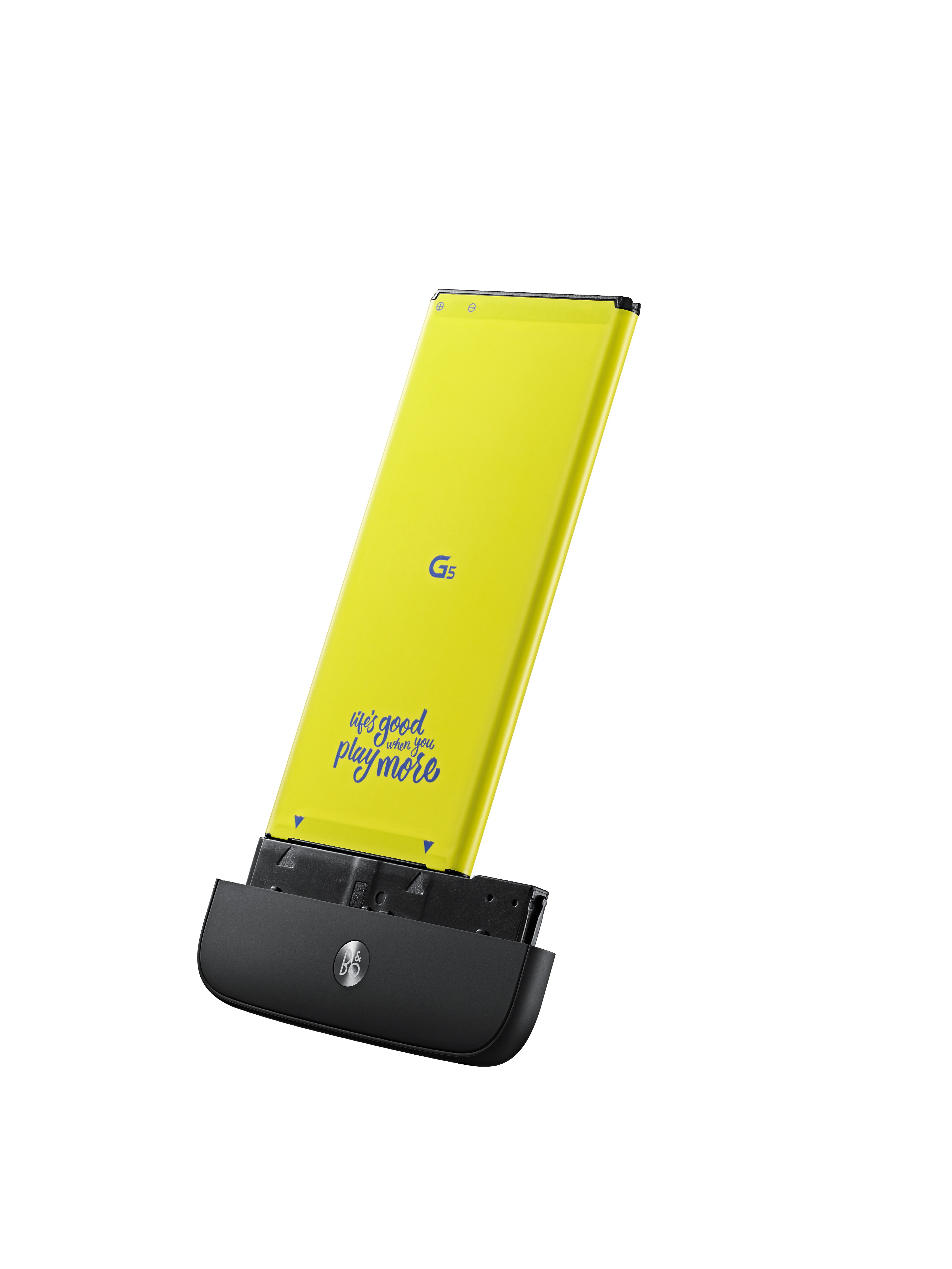 H3 by B&O PLAY is a set of high-end earphones that is compatible with the high-quality sound of the LG Hi-Fi Plus with B&O PLAY. Designed for audiophiles as well as anyone who considers audio performance a top-priority in a smartphone, H3 by B&O PLAY works with all Android smartphones. 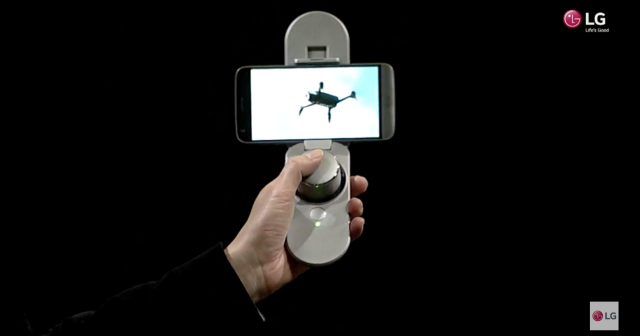 Beyond being the company’s first modular smartphone, the G5 is a beast when it comes to specs.

The LG G5 is equipped with the powerful yet energy-efficient Snapdragon 820 processor which offers advanced features such as 64-bit performance, Adreno 530 graphics and lower-power Qualcomm® HexagonTM DSP as well as Qualcomm Spectra™ 14-bit dual image signal processors (ISPs) designed to deliver high resolution DSLR-quality images and additional power savings. The Snapdragon 820 processor also has an integrated X12 LTE modem that supports Category 12 download speeds of up to 600 Mbps and LTE Category 13 uplink speeds of up to 150 Mbps.

Compared to the previous generation Snapdragon processor, Qualcomm Technologies’ most advanced CPU architecture offers double the speed and power savings. Adreno 530 graphics demonstrate up to 40 percent faster graphics performance and up to 40 percent more power efficiency compared to the previous generation. The Snapdragon 820 processor also supports 4K capture and playback at four times more than the resolution of 1080p, enabling users to watch and capture their daily moments in stunning detail and clarity. The processor is also optimized for VR, generating quality pixels and life-like colors to deliver the ultimate VR experience to G5 users.

The LG G5 is equipped with aptX HD, an enhanced codec that supports 24-bit sound over Bluetooth, delivering rich and clear sound over wireless connections without any loss. When paired with the LG TONE Platinum, users can experience superb quality Hi-Fi audio that sounds amazingly close to the original source.

The LG G5 has excellent battery life, thanks to the Low Power Location Estimation technology. This solution enhances the battery efficiency by as much as 41.9 percent by improving the power consumption related to location-based apps.

“The new LG G5 will encourage owners to rediscover the true joy of a mobile life,” said Juno Cho, president and CEO of LG Electronics Mobile Communications Company. “The G5 and LG Friends are the result of many experts inside LG asking themselves if it was still possible to be innovative and unique in the smartphone space. I think once customers spend a little time with the LG G5, their answer will be a resounding yes.”

*Specifications may vary depending on the market.

We’ve reached out to LG Mobile South Africa to find out pricing, local availability and whether or not all of the LG Friends will be available but have received no response from the company yet.

While the G5 doesn’t look like the most attractive smartphone ever made, it’s not the worst looking either and could very well be like the Nexus 6P which looks much better in real life than it does in pictures.

Overall though, the G5 looks set to be one of the most talked about smartphones of 2016 and could potentially be the turning point for LG Mobile.

LG, colour us impressed. We certainly can’t wait to #PlayMore