From the 17th-19th July 2013, at the popular Coca-Cola Dome, the much anticipated event MediaTech was hosted.

MediaTech is the pivotal event of the year, where people in the industry of Media and Technology get to introduce new products and information into the ever expanding industry. Following the success of 2011, when the expo hosted 6 395 visitors and represented over 800 brands, this year’s show definitely followed in the previous ones success.

Major brand in technology Sony were at the event to present the recently launched Sony PMW-F55 and F5 cameras together with the Sony RAW recording capability. They also launched the Optical Disc Archive (ODA) system which uses proven optical disc technology, along with the new generation of OLED Grading and Broadcast Monitors. 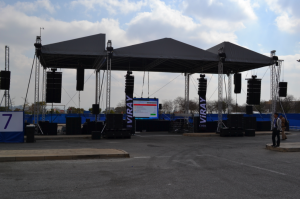 The outdoor area accommodated a common stage where brands: Matrix Sound, Audiosure, Sound Harmonics, Viva Afrika, CES Live, Segma, Wild and Marr and Tadco showcased their systems. The most innovative and brand new systems were presented right outside the event to prove just what power they possessed!

MediaTech proved themselves as the leader in showcasing brand new media and technology this year, but one thing is for sure, we know 2014 is going to be even better!