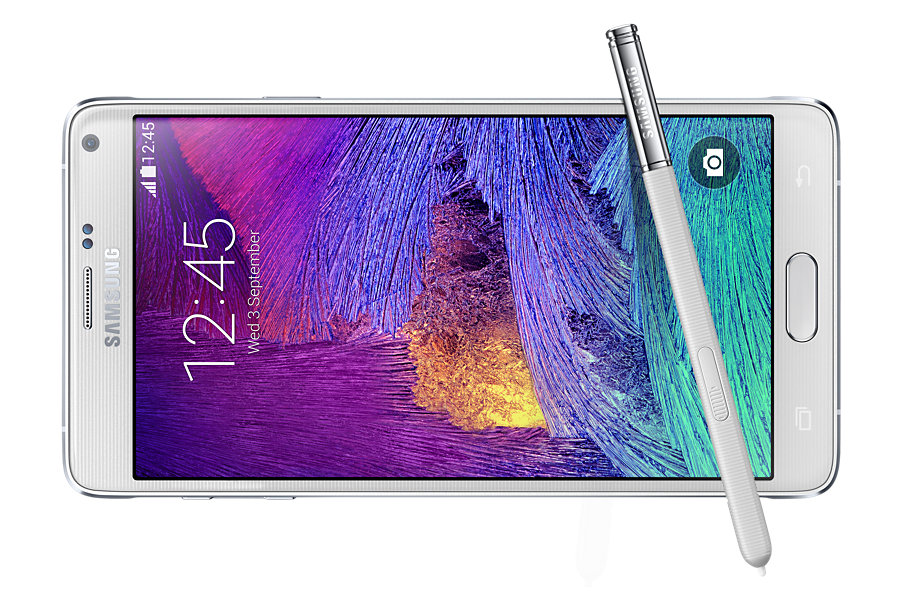 Samsung’s latest phablet makes us sit up and take NOTE

When Samsung launched the first Note back in 2011, I thought to myself “everyone’s been working to make their phones smaller and Samsung’s making this huuuuge device, are they crazy?!”. I was convinced that no-one would want such a large phone.

Clearly I was wrong.

The Galaxy Note range has not only gone on to become one of Samsung’s best selling range of devices, it also created an entirely new category of mobile device, the phablet. 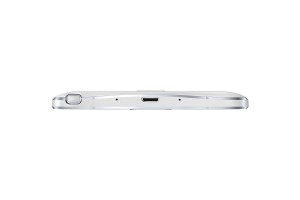 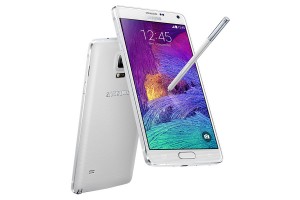 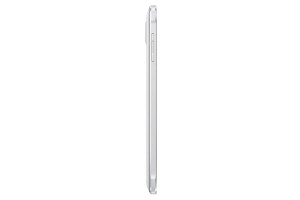 When I first saw the Note 4 at the product launch last year, I was immediately impressed by the design. Gone was the faux leather stitched back, no more plastic to be found around the edges, no, the Galaxy Note 4 was clearly the ” after” in a complete makeover show. With its chamfered metal edges and clean lines, I knew that this device was one that I desperately wanted to get my hands on.

Fast forward to 2015 and lucky me, I get my hands on a beautiful frost white Samsung Galaxy Note 4. I actually did a little happy dance in my office when I unwrapped the delivery, much to the dismay of my co-workers.

I spent the first few minutes familiarizing myself with this powerful beast as well as tweaking home screen layouts and downloading all of my favorite apps. Once all of my apps were downloaded, I realized that I still had TONS of space thanks to the 32GB onboard storage as well as the option to add more storage via an SD card slot.

“So far, so good” I thought to myself. Not all devices live up to the hype that surrounds them when they’re released but so far, the Samsung Galaxy Note 4 wasn’t letting me down.

Later that day, I headed home and realized that I was headed out that evening and my phone was running pretty low (3%) on battery power. The usual groans (and some cursing) followed “why didn’t I plug it in earlier” “how am I going to survive without a phone”. What was the first thing I did when I arrived home? You got it! I made a mad dash for a wall socket to plug the Note 4 in and just hoped that it would be able to charge just a bit (if the power did not go out) to get me through part of the night.

After showering and changing into a fresh set of clothes, I grabbed my keys and headed over the my phone to see how much battery power I had to work with.

To say that I was shocked was an understatement. I’d completely forgotten about the Note 4’s fast charging capability. In 30 minutes, the battery went from 3% to 54% charged! I think I might have done another little happy dance, I can’t remember, I was that deliriously happy.

The next day was an early morning flight to Johannesburg for me. Now, unlike most people, when I travel, I tend to be loaded up with tech and gadgets. I always take my laptop, tablet, e-reader, MP3 player, smartwatch, smartphone and a power bank. This time, I decided to leave behind my tablet and my e-reader and use the Note 4 instead.

So there I was at the airport at an ungodly hour in the morning and as is always the case in the life of a blogger or journalist, there was work that needed to be finished. Instinctively I reached for my laptop in order to carry on working, but then I thought “let’s see what this Galaxy Note 4” is really capable of.

So, Note 4 in hand (with my Samsung Level In earphones in my ears) I got to work.

Multitasking has always been one of the reasons why people write their articles on a laptop, however the Note 4 showed me multi-tasking in a way I’d never seen before on a mobile device. I was able to work in 2 windows simultaneously (with one below the other) or have one window essentially floating atop another window and I could still interact with both windows! Not only that, but swopping between different apps was easy thanks to a simple tap of the capacitive menu button on the device from the home screen. Researching, responding to emails and writing an article have never been this manageable on a mobile device before. Yes, I did indeed say writing an article. This device is so powerful that I’ve actually written an entire article on it, in fact, this very article was written entirely on the Galaxy Note 4. 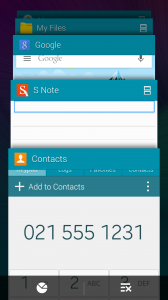 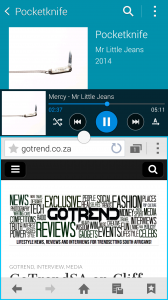 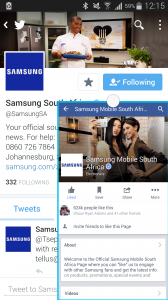 After having finished my work for the morning, it was time to board my flight. After take-off, I needed to keep myself entertained on the flight, so after making sure that my phablet was in flight mode, I started watching a movie that I had downloaded. I’ve used phones with quad HD displays before but never before had I seen one with such vivid colour. I actually ended up turning the display brightness down to just below 50% because the richness of colour and the brightness of the display were more than my eyes were used to. In fact, the display was so impressive that my neighbor on the flight proceeded to ask me all about the “incredibly beautiful phone” that I was using. She was in love with the design and the vivid screen and confessed that even though she was a fan of a difference handset manufacturer, that this phone could persuade her to swop over to Android and Samsung.

After much chatting about the functionality of the Note 4, the fast charging, the impressive 16MP OIS camera, the multitasking capabilities, the unbelievable ultra power saving mode and the refined design, we realized that our plane was getting ready for landing.

After we parted ways, I ran into a few journalists who had flown to Johannesburg for the same event that I was there for. As usual, everyone was exchanging numbers and business cards. Now anyone who knows me knows that I’m not a fan of business cards. They tend to get lost or they rip and let’s be honest, in such a digitally rich age, why are we still using pieces of cardboard? I proceeded to take down numbers by using the S-Pen that comes with the Note 4. All I did was slide the S-Pen out of the bottom of the Note 4 and used Action Memo to take down a phone number.

What’s Action Memo? Only one of my most favorite things ever! By detaching the S-Pen, you activate a few smart actions that the S-Pen can perform, one of those being Action Memo. Action Memo opens a note-like application that allows you to jot down anything like a phone number, an e-mail address or something that you might want to search for online at a later stage. Once you written something down, you select Link To Action at the top of the memo and it highlights what you’ve written and gives you the option to open that note in the phone dialler or in an email or browse the web or to add it to a to-do list. I’ve been able to create new contacts in my list of phone contacts by using the Action Memo feature. Definitely one of the most useful features I’ve ever seen and used on a mobile device. 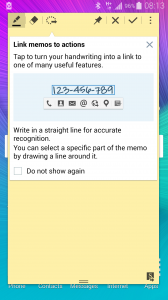 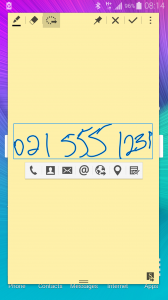 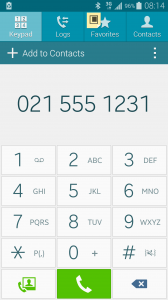 One of the other S-Pen features that I really love (and use quite often) is Smart Select. Essentially it’s like a screen capture where you select exactly what you want to capture. So no more having to hold the home button + power button to take a screenshot then editing out bits of the screenshot that you don’t want someone to see. Smart Select allows you to choose what to capture and then allows you to save it in the Scrapbook app or to share it immediately either via social media or instant messaging or email or Bluetooth etc.

Overall, the Note 4 is an impressive device. Easily the best mobile device to have come from Samsung. The picture quality is beyond belief (I’ve seriously never seen colour so vivid or such deep black before), the sound quality is much improved over previous devices (I usually play around with audio levels and equalizer settings when listening to music on a mobile device but I didn’t on the Note 4), the multitasking is far more fluid than on any other smartphone and the overall design shows that Samsung has refined who they are. The Note range was already a huge success, the Note 4 is an evolution that shows that Samsung is learning the art of simple elegance.

The Note 4 is a device that was clearly meant for a power user but is also completely at home in the hands of the fashion conscious (as I discovered at a fashion week event where designers and models alike were ooh-ing and aah-ing over my Note 4).

My experience with the Samsung Galaxy Note 4 has been beyond belief. It’s taken every challenge I’ve thrown at it and met it head on. Everything from business to entertainment to social media to surviving load shedding, the Note 4 has outshone any other phablet I’ve ever used before. And any device that can replace more than one device in my life is a definite must have in my opinion.

Is the age of the phablet here? If Samsung’s Note range has anything to say about it then the the answer is an emphatic YES!